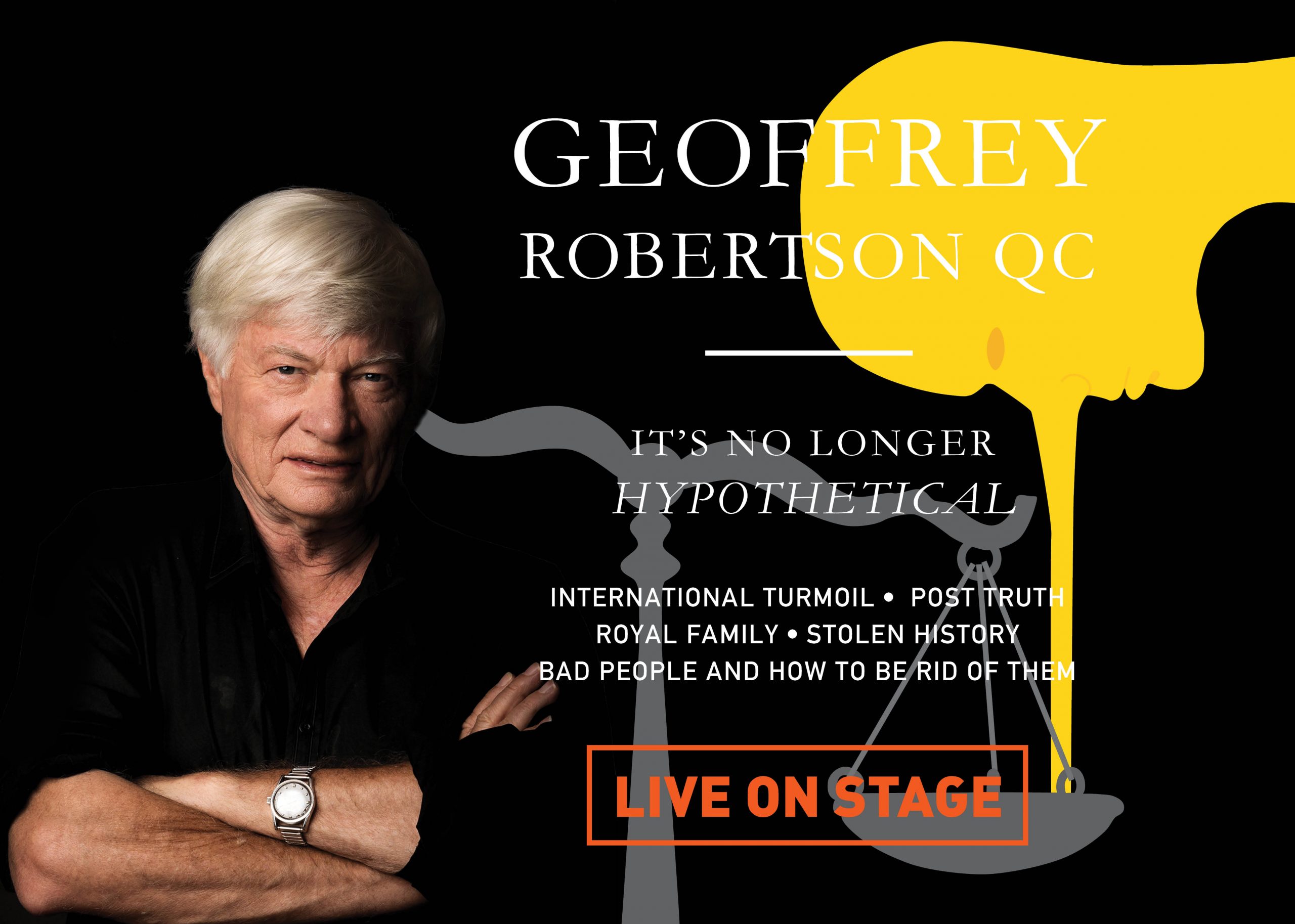 One of the world’s great minds challenges Australians and explains what is happening in and to the globe.

Geoffrey Robertson will analyse the post-truth era, explain how fake news distorts democracy, what is really happening to the royal family, and his calls for Australian constitutional regeneration.

He will explain what is happening to Julian Assange, how to stop the rich from inheriting the world, and the thinking behind his upcoming book “Bad People – And How to Be Rid of Them.”

The show will give an insight into his life and famous cases and his crusade to restore cultural property from museums around the world to the people from whom it was stolen.

Geoffrey Robertson AO QC is a barrister, author and one-time host of “Geoffrey Robertson’s Hypotheticals” on the ABC. He is founder and head of Doughty Street Chambers; now the largest human rights practice in Europe; where he has been mentor to Amal Clooney, Jen Robinson, Keir Starmer and others.

Robertson was born and bred in Sydney. A Rhodes scholarship took him to England where he is now based, and he holds dual citizenship. He is a Master of the Middle Temple and a visiting professor at the New College of Humanities. His autobiography, “Rather His Own Man – In Courts with Tyrants, Tarts and Troublemakers” was published by Penguin/Random House in 2018.

From his outspoken leadership of students in the 60s to his work fighting for the lives of death row inmates, GR’s career has been marked by courage, determination and fierce independence. He was involved in the prosecution of General Pinochet and Hastings Banda and in the defence of Salman Rushdie, Mike Tyson, Julian Assange and Lula (former president of Brazil). Among much else, he secured Yulia Tymoshenko’s release from prison in Ukraine, exposed the Medellin Cartel’s gun-running in the Caribbean and helped restore democracy in Fiji. He is credited with changing the way we think about human rights, notably through his book “Crimes Against Humanity”.

These shows will be run with the appropriate Covid-19 protocols in place, as mandated by the State Government regulations at the time.

Under Federal and State Government regulations, Sydney, Newcastle, Melbourne, Brisbane, Adelaide and Perth can all be run at 100% occupancy.

You may be required to wear a mask during the performance. Currently, the following rules apply:

WARNING; Only buy tickets from Ticketek, Ticketmaster, BASS & QPAC – these are the official ticket agencies that have been authorised by Lateral Events to sell tickets. Unauthorised ticket on-sellers will add significant premiums onto ticket prices, and often sell non-existent tickets. Please don’t be caught out. For the avoidance of doubt, Viagogo is not an authorised ticket seller.

If you are seeking an Event Management Company, we’d be delighted to hear from you.
Contact: Megan Peters, General Manager via Email, or call +61 2 8272 4503